The Boy with the Leaky Boot Statue 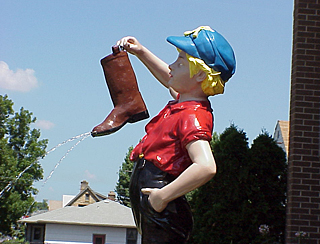 In the summertime, the Boy with the Leaking Boot stands outside Stevens Point Fire Headquarters. Holding one of his boots overhead, water streaming from the toe, he gazes toward something along the horizon that we perhaps cannot see.

A bright future? A token of happiness from the past?

Considering his difficult past, he may well be looking ahead.

The design of the Boy might have originated in Italy (or Germany, France, or Belgium) in the middle to late 1800s - no one seems certain where, or when. Any knowledge of his creator is lost to history as well, and it is likely that no more than seven of the original castings are now on display throughout the world.

Stevens Point's Boy was ordered from the J. L. Mott Iron Works of New York City. He arrived in Stevens Point via the Wisconsin Central railroad in March or April 1895, and was installed in early May as part of a drinking fountain for "man, beasts and dogs" in the center of the Public Square. 1 The fountain seems to have consisted of the Boy, several side jets with cups from which people could sip, and a walled basin near ground level for the animals. Within six months, the side jets and cups had been removed, and the Boy had been relieved of his leaking boot. The uncontrolled spray that resulted from the removal of the boot was remedied first with a short piece of pipe, and then with a rubber tube which was wrapped around the Boy's torso and leg. In this condition he was referred to as a "snake charmer." 2

In the afternoon of February 5, 1896, a team of horses "made a scattering on the public square…, swinging around on Main street and knocking a section out of the fountain." 3 The following morning, "A mare hitched to Wm. Gray's delivery bobs ran away… Starting on the public square, she ran east, striking the basin of the fountain and detaching the rear bob." 4 The extent of the damage caused by these incidents is not clear, but the fountain was repaired and placed in running order. 5 (It should be noted that the fountain remained in operation year-round until November 1905, when it was determined that winter operation was not recommended.) 6 On May 7, 1896, a man driving in his family phaeton collided with the fountain; and sometime before May 23, the Boy was given a fresh coat of paint: "The snake charmer rejoices in a coat of silver hue." 7

At the May 10, 1897 city council meeting, "The fountain on the public square came in for a scoring on its unsightly and damaged condition and the street committee was given full power to act in the matter." 8 It's likely that little was done, however. In October, under the heading "Take It Away," the editor of the Daily Journal penned, "The poor little silver kid is alright if he only had a decent place to stand. Some junk man will come along some night and mistake the whole thing for a pile of scrap iron." 9 Something was finally done in April 1898: "Street Commissioner Cauley has had a crew of men at work today overhauling the fountain on the Square. The iron support will be removed, the basin lowered and a new support of brick will be substituted for the iron." 10

Then, in August 1898, "The cast iron boy, who guards the fountain on the square, is suffering with a broken leg and now stands unsteadily on one foot. Since the accident he has become remiss in his duties and now the water flows out as rapidly as it comes in, leaving only an inch or two in the bottom of the basin for the horses to drink." 11 Unless the writer was referring to February 1896 (2 ½ years earlier), no record of the accident referred to has been found.

June 2, 1914, after a twenty year career, "The city has torn out the old fountain which has been used for watering horses on the public square for many years, and is replacing it with concrete, encased in boiler iron. It is hoped that the new one will stand the hard usage better than the old one did." 12

The June 1914 removal date corresponds well with a photograph owned by the Stevens Point Fire Department, which is dated "about 1916," and shows the Boy standing on his knees outside the old Engine House No. 1.

As the story goes (and it has been fairly well corroborated), after his removal from the Square, the Boy was disposed of in a field adjacent to a slough behind E. H. No. 1. He was soon "rescued" by a couple of local fire fighters, Lyman Rowe, Sr. and Herman Krembs. They stood him up (on what remained of his legs) in an upturned section of a dirt-filled sewer pipe outside No. 1 fire station.

In 1936, the elements having taken their toll, the Boy was repainted. Carl Kitowski and Joseph "Joker" Szarafinski did the work under the supervision of Fire Captain Joseph Pleet. The men thought the Boy should be holding something in the hand which held the boot some forty years before, and a fish was decided upon. A fish was drawn on cardboard and sent to the local W.P.A. chair factory in the hope they'd mill one from their wood stock. A fish from the factory was not forthcoming, however, so Szarafinski fashioned one from a board using a jackknife. 13

In 1941, Fire Captain George Fisher performed another restoration for the Boy: "He's been entirely repainted in lifelike colors. Around his neck are a creel and a landing net, a rod is tucked under the left arm, while in the right hand, dangling from a leader, is a 'trout' - a cleverly carved wooden replica of a rainbow, complete even to multi-color speckles." 14 Most of Fisher's adornments disappeared in short order, but the wooden trout reportedly remained for many years.

In 1967, the Boy was moved to the newly built No. 1 fire station on the corner of Franklin and Division streets. The plans for this station did not include a place for him, so he was relegated to the basement with the intent to display him again someday.

Attempts were made to restore him, including lending him to the University of Wisconsin - Stevens Point for refurbishment by students and faculty of the Art Department. These efforts were unsuccessful, and the Boy was actually lost for nearly two years.

He was eventually found in a building on the university campus, and an effort to display him was led by the late Assistant Fire Chief Ray Bartkowiak. Tom Tylka, a local creator of concrete decorations, formed lower legs of concrete, and Jim Durtschi, a local high school student, refinished him with fresh paint. Fire fighters built a pedestal and pool with materials donated by local businesses. In July 1975 he stood once again on his own two feet, holding aloft a leaking vinyl boot. Thus he stood for fourteen summers, dismantled each autumn for an annual touch-up by fire fighters. 15

On October 15, 1988 two young men wreaked havoc on the boy by pushing him off of his pedestal. He was decapitated and had a three inch wide hole punched in his chest. 16

A fund was started which raised about $1300, but the initial estimate for complete restoration was a heart-stopping $40,000! 17

Offers came in from local craftspersons, body shops, and jewelers to fix the statue by welding it or using wood, tin, fiberglass, or epoxy. The most promising offer came from John Becker, of Becker Industry, a machine shop in Milladore. This craftsman volunteered his time and that of four of his employees to repair the Boy.

Eight months of nights, weekends, and free time between work orders, about 400 hours in all, went into Becker's painstaking restoration. The old paint was carefully removed. A metallurgist helped him determine that sand, pewter, white-based metal, and old welding rods were among the materials originally used in the statue. Using photographs of similar statues, Becker attempted to recreate every stitch and wrinkle that had been obliterated by nearly a century of history. He even went so far as to recast the Boy's lower legs and leaking boot. 18

Once again the Boy was given a fresh coat of paint and on June 30, 1989, he was rededicated on the fountain at the No. 1 fire station in front of about one hundred of his grateful fans. 19

For nearly nine years, the Stevens Point community and visitors enjoyed the Boy, sometimes stopping for a photograph or just a closer look. On June 20, 1998, a vandal tore off the Boy's head and carried it with him into the night. It appeared that the Boy's saga had ended, but three days later, the head was turned in at the Stevens Point police station. 20

Once again, John Becker volunteered to make the needed repairs. The mayor's office, under Mayor Gary Wescott, donated $500 to the effort, and a local security company, Horgan Sales and Service, offered to install video recording equipment onsite to deter vandals. 21

In April 2000, Horgan did install a video security system which monitors the area around the fountain. 22 Soon after, when frosty nights gave over to a late spring mildness, the renewed Boy was placed on his pedestal.

The security system seems to have worked, but when the fire fighters considered all the facts of the Boy's history they realized that changes were needed: some arrangement which would secure the Boy but still allow people to enjoy his presence.

In June 2008, fire fighters met with university professors once again, this time about an idea for protecting the Boy. As a result, in early 2009 Christopher Engebretson, a student at the university, agreed to make a mold of the statue and cast him in concrete. Engebretson put more than 150 hours into the project during his final semester at school. Details, such as painting both statues, continued into early summer. The fountain outside the fire station was empty, and concerned people inquired about the welfare of the Boy. 23

In July 2009 the new casting was installed, and passersby were once again afforded the pleasure of the Boy's company.

The fire fighters have been considering options for the original Boy. Locking him in a closet is not high on the list. It appears unlikely, however, that he will again be part of an outdoor public fountain. An idea which seems to be gathering support is to install him in a glass case inside Fire Station Number 1. His future might be looking a bit brighter.

Departments
Agendas, Minutes, Videos
Payments
Property Search
How Do I?
Search this Site