For commitment to improving conditions for bicycling through investment in bicycling promotion, education, infrastructure, and pro-bicycling policies, Stevens Point has been named a Bronze Bicycle Friendly Community by the League of American Bicyclists.

An increasing number of city leaders in communities across the country, including Stevens Point, are embracing the environmental, financial and quality of life benefits that come with a Bicycle Friendly Community. They are recognizing that bicycling can be the solution to many community challenges. Today, the League of American Bicyclists is announcing the latest round of Bicycle Friendly Community (BFC) awards and Stevens Point has been named a Bronze BFC.

"Stevens Point is playing a critical part in creating a truly Bicycle Friendly America," said Andy Clarke, President of the League of American Bicyclists. "We know Stevens Point's investment in bicycling will be returned many times over in the health, environmental, and quality of life benefits of a thriving community."

The BFC program is transforming the way communities evaluate their quality of life, sustainability and transportation networks, while allowing them to benchmark their progress toward improving their bicycle-friendliness. With this impressive round, there are now 408 BFCs in 50 states across America. The Bronze BFC award recognizes Stevens Point's commitment to improving conditions for bicycling through investment in bicycling promotion, education programs, infrastructure and pro-bicycling policies.

The BFC program provides a roadmap to building a Bicycle Friendly Community and the application itself has become a rigorous and an educational tool in itself. Since its inception, more then 870 distinct communities have applied and the five levels of the award – diamond, platinum, gold, silver and bronze – provide a clear incentive for communities to continuously improve.

Apply or learn more about the free BFC program. 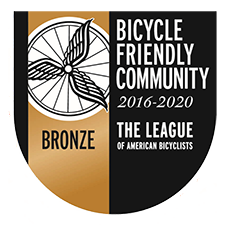 About the Bicycle Friendly America Program